Below is the story on the origins of this historic whiskey brand.

So pour Yourself A Drink, Keep Scrolling Down & Enjoy!

Established in 1780, at the dawn of the American Revolution, and distilled over 3 family generations, the Pepper family brand of whiskey is one of the oldest & most legendary whiskey brands in both Kentucky and American history. Starting with Elijah Pepper (distiller 1780-1838) and then his son Oscar Pepper (distiller 1838-1867), Oscar’s son the Colonel James E. Pepper (distiller 1867-1906) was the 3rd generation of that distilling legacy. James E. Pepper was a larger than life bourbon industrialist, a flamboyant promoter, and took the family brand to it’s highest peak. A Kentucky captain of American industry, he raced thoroughbreds in the Kentucky Derby, traveled in a private rail car & helped introduce the world to the Old-Fashioned cocktail. He nicknamed his whiskey “Old 1776” and proudly proclaimed his continued use of his grandfather’s original Revolutionary-era recipes. This grand story begins in 1776, the year America declares its independence…

America declares its independence from England and the American Revolutionary war
ensues. Four years later, in 1780, during the midst of the Revolution, a young Elijah Pepper, of Culpeper, Virginia, builds his first whiskey distillery. In 1790, after the war has concluded, Elijah leaves his home and ventures west, further out into the Virginia frontier. He settles in the area near present day
Versailles, in Woodford County, Kentucky (prior to 1792 present day Kentucky was part of Virginia).
Elijah built a new distillery in Versailles at a spring behind the court house and became well-known as a superior local farmer-distiller. When the Whiskey Rebellion arose in 1794, Elijah was one of the few distillers with pockets deep enough to pay the demanded excise taxes. Many other local farmer-distillers were forced to give up distilling due to the high taxes and sold their grains to Elijah, which he, in turn, distilled. In 1812, Elijah bought a large tract of land nearby below the spring on Glenn’s Creek. There, Elijah erected a cabin for his family and built a new larger distillery. Today, the distillery site on Glenn’s Creek is a National Historic Landmark and is home to the Woodford Reserve® Distillery (Woodford Reserve® is a registered trademark of the Brown-Forman Corporation) . 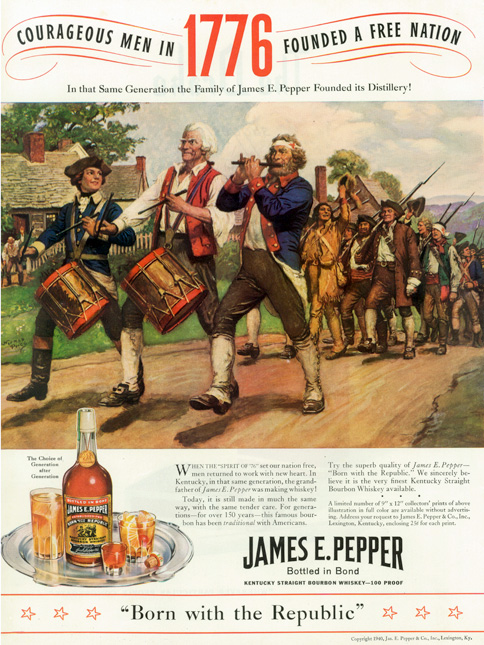 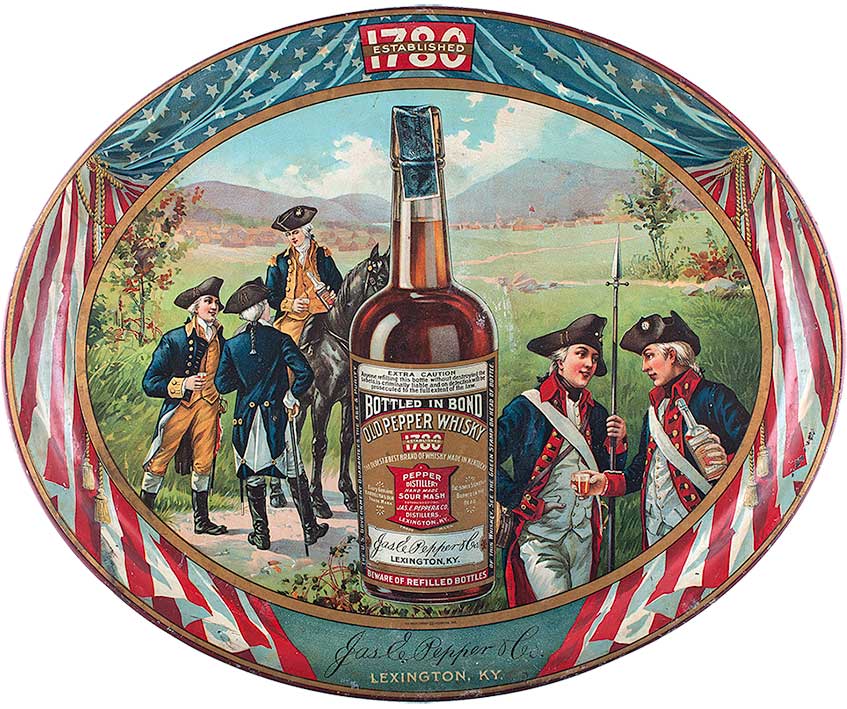 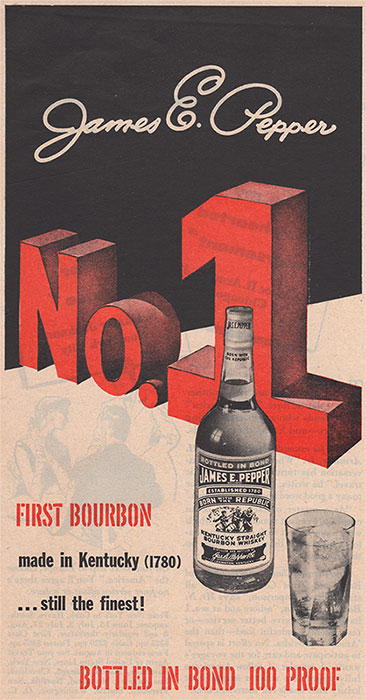 Elijah runs a successful distillation operation until his death in 1838, leaving the distillery to his son and successor, Oscar. 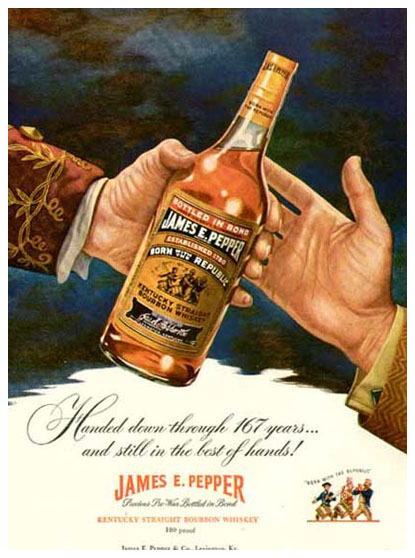 Oscar builds the new, larger ‘Old Oscar Pepper’ distillery on the same site. He hires a Scottish chemist by the name of Dr. James C. Crow (ie, Old Crow® Bourbon – Old Crow® is a registered trademark of Jim Beam Brands Co.), and working together the sour mash process for making whiskey is perfected at the distillery, revolutionizing how whiskey is made in a process that still widely used to this day.

President Abraham Lincoln once famously replied to some critics of Grant, “By the way, gentlemen, can either of you tell me where General Grant procures his whiskey? Because, if I can find out, I will send every general in the field a barrel of it!” 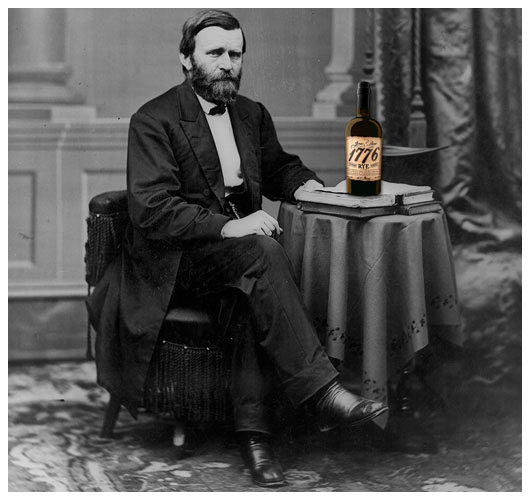 To clarify, we have taken some artistic license with the old photo above

Oscar passes, and his son, the young James E. Pepper, takes over the distillery. 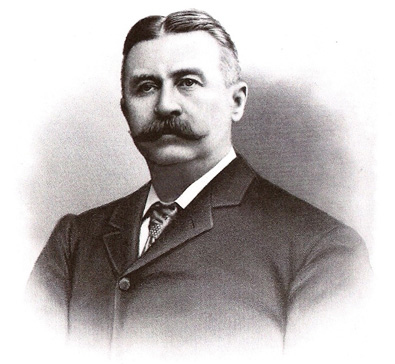 Colonel James E. Pepper, was a larger-than- life bourbon industrialist and flamboyant promoter of his family brand.  An avid and noted horseman, he operated the finest stable in Kentucky and raced his thoroughbreds in the Kentucky Derby multiple times. He traveled in an ornate private rail car, painted with images of his famed whiskey label and named ‘The Old Pepper’, and was the most heavily insured man south of the Ohio River. He spent a considerable amount of time in Manhattan, and his activities in both Manhattan and Kentucky were often reported on by the New York Times. While in New York he would stay for extended periods of time at the famed Waldorf Astoria® Hotel (a registered trademark of HLT Domestic IP, LLC).

During these stays he was known to socialize with other American captains of industry, including John D. Rockefeller, Theodore Roosevelt, C.V. Vanderbilt, Charles A. Pillsbury, Fred Pabst, Charles L. Tiffany, & William Steinway. It was through these trips to the Waldorf that Colonel Pepper helped introduced the world to the “Old Fashioned” cocktail, which was said to have been invented in his honor by a bartender at the famed Pendemmis Club in Louisville, Kentucky. Colonel Pepper proudly proclaimed his continued use of his grandfather’s original Revolutionary‐era recipes, and as such nicknamed his whiskey “Old 1776”. 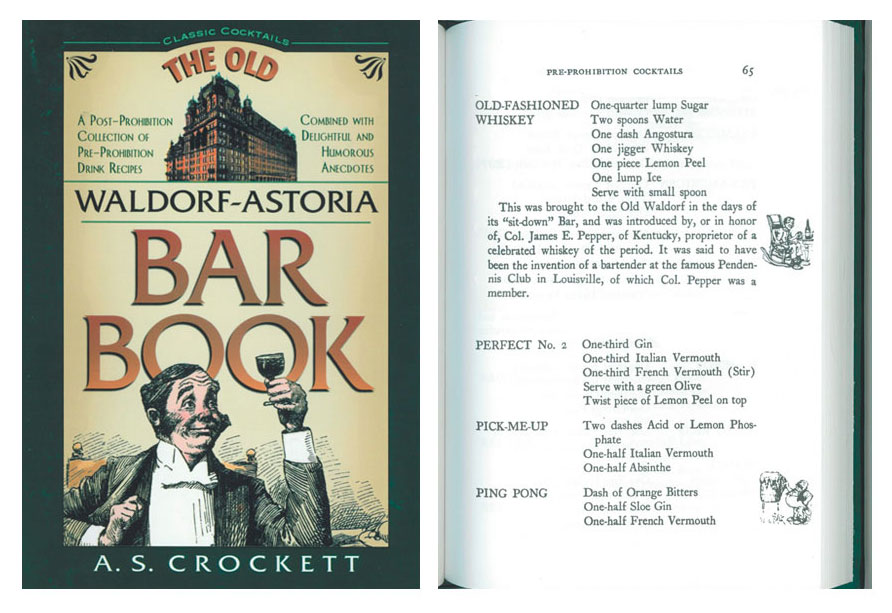 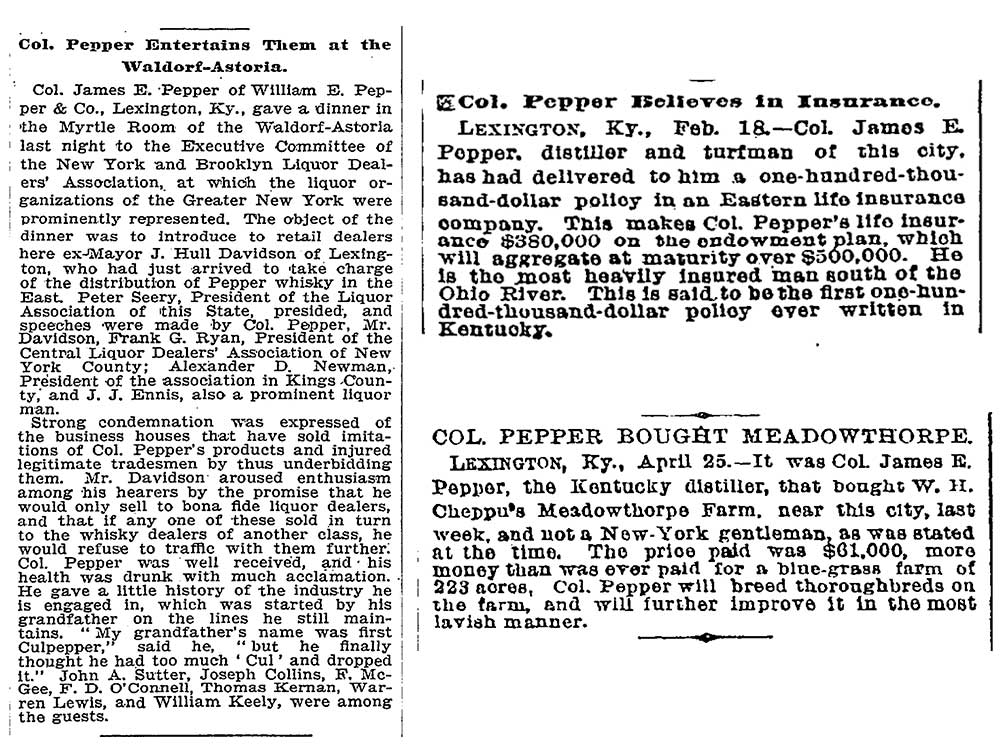 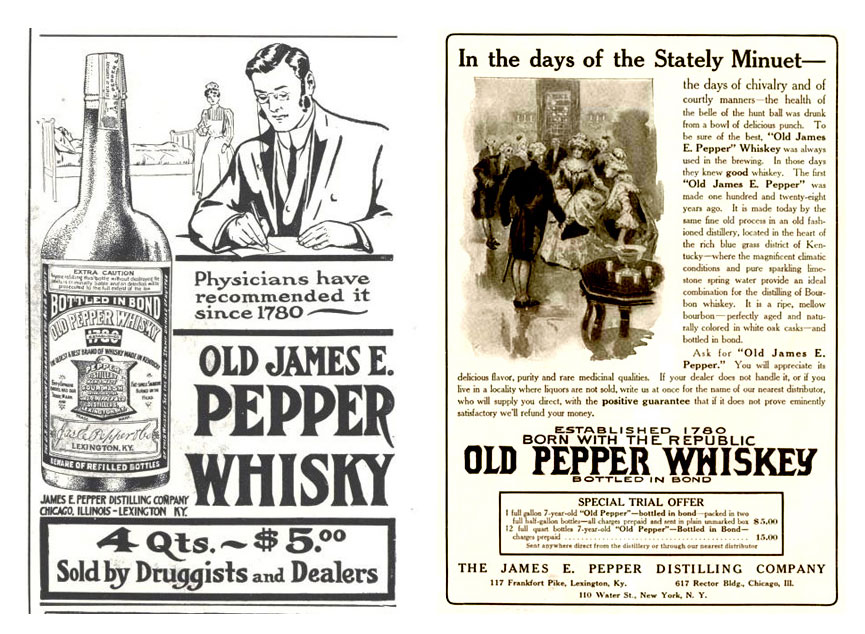 After having to sell the old family distillery due to financial problems, James moves to New York for a time, and then returns to Lexington, KY & builds the James E. Pepper distillery. It was the largest bourbon distillery in the US, and it s remnants today are listed on the N ational R egister of H istoric P lac es. 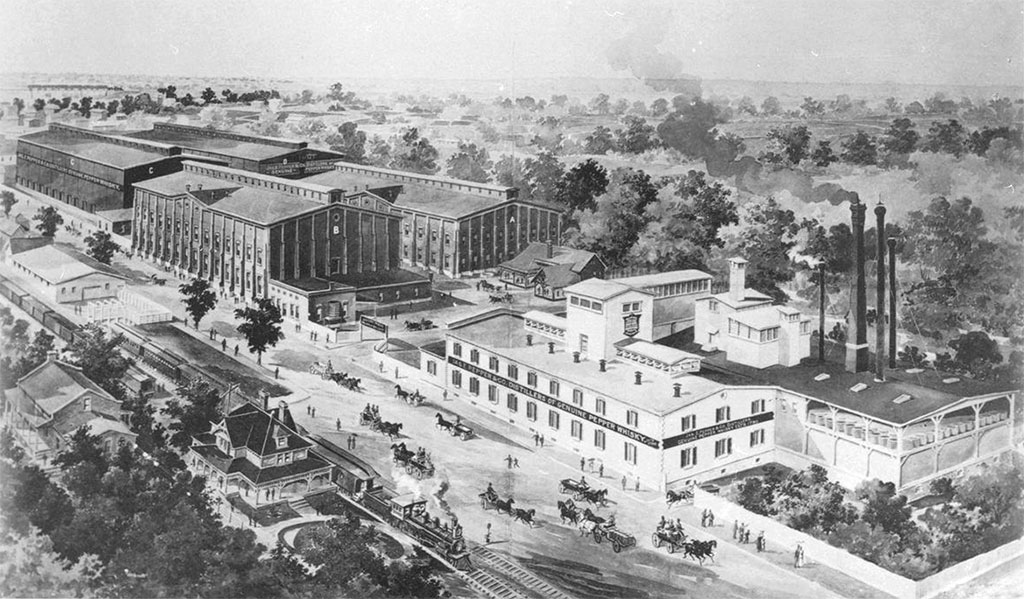 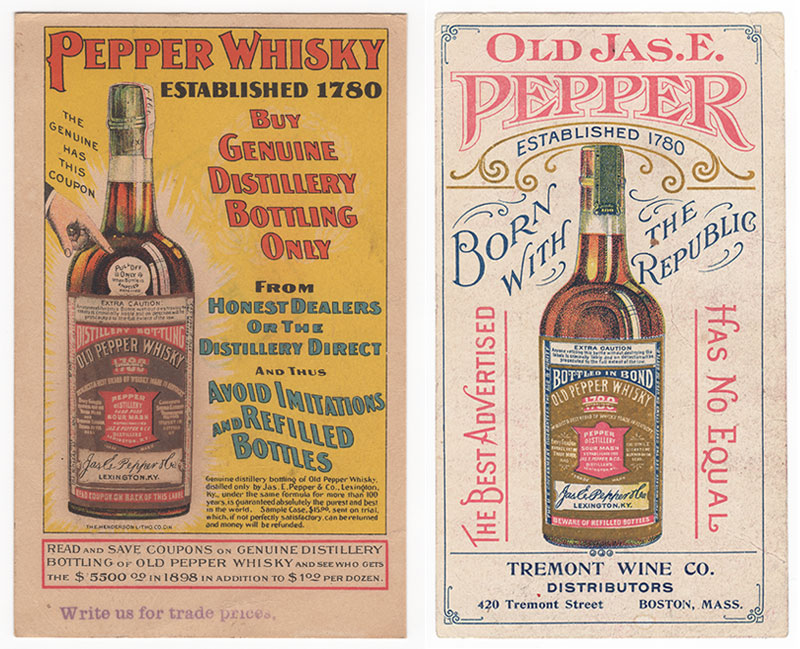 While visiting the Waldorf‐Astoria hotel in Manhattan for Christmas, Colonel Pepper suffers an accident on an icy sidewalk resulting in severe fractures to his leg. Over the next few days his injuries worsen and on December 24, Christmas Eve, 1906, Colonel James E. Pepper dies.

At the time of his death, Colonel Pepper had been described as “one of the best-known distillers of fine whiskies in the world, whose brands have probably been more universally advertised than any other of the Kentucky distilleries.” It was also reported that the distillery was a “mammoth concern, which had agencies and branches in every part of the civilized globe.”

Colonel Pepper left a sizeable estate to his wife. Having no children, the distillery was sold to investors and continued operations. His widow auctioned Meadowthrope Farm and his horses, except Mrs. Pepper kept one horse, named Prince Pepper. The Imperial Stud Farm of Japan had once offered any sum of money for Prince Pepper. Mrs. Pepper died on April 2, 1939. At her burial a statue of her was erected in the cemetery. Both are buried in the Lexington Cemetery.

The 1st African-American Heavyweight Champion of the World, Jack Johnson, defended his title against Jim Jeffries in ‘The Fight of the Century’.  James E. Pepper whiskey is a proud sponsor of the historic event. 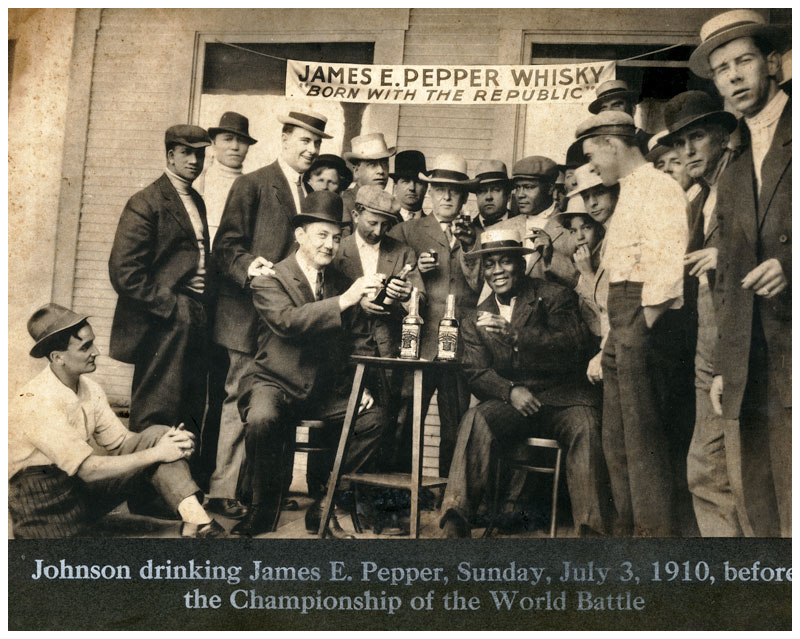 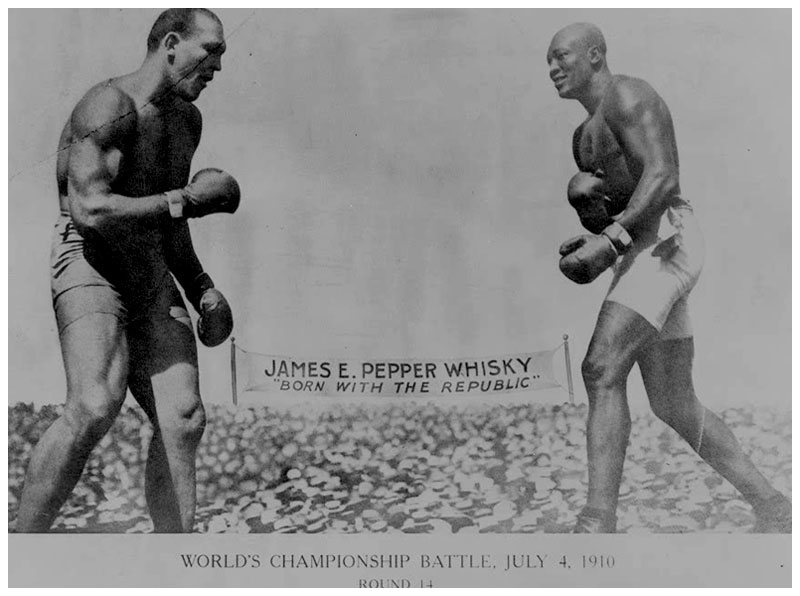 The prohibition of alcohol is enacted and enforced in the United States. James E. Pepper whiskey is one of a handful of whiskey brands still sold for “medicinal purposes”. 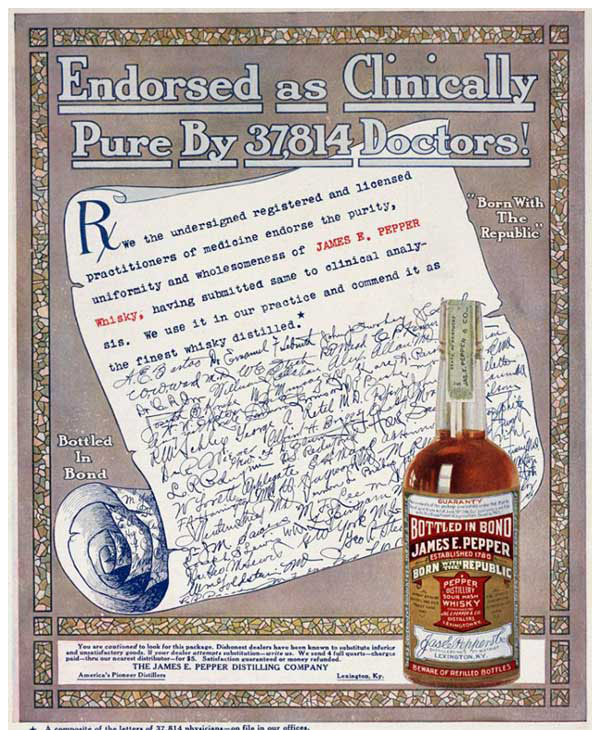 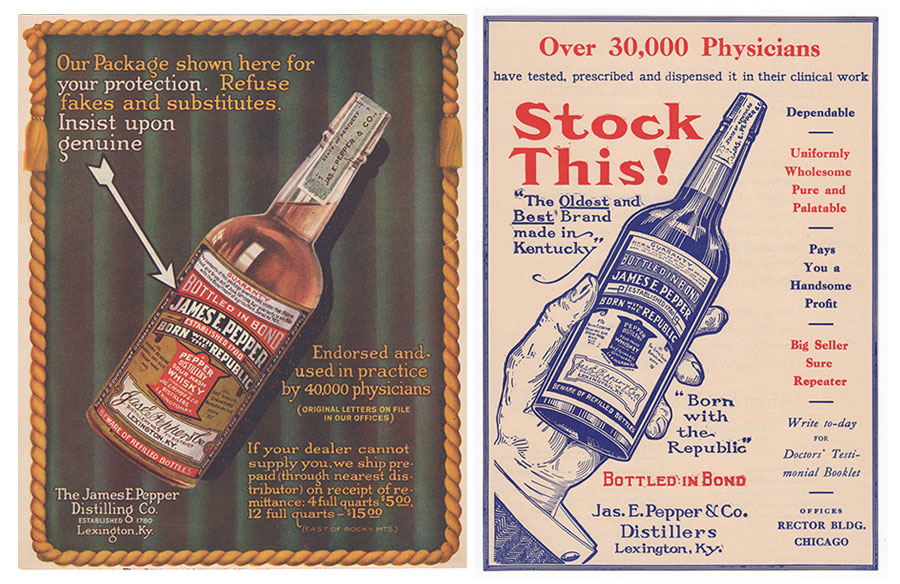 Prohibition ends in Kentucky, & James E. Pepper comes back full steam. After a devastating fire, a new distillery is constructed and the brand continues to thrive and grow into one of the largest whiskey brands in the nation. 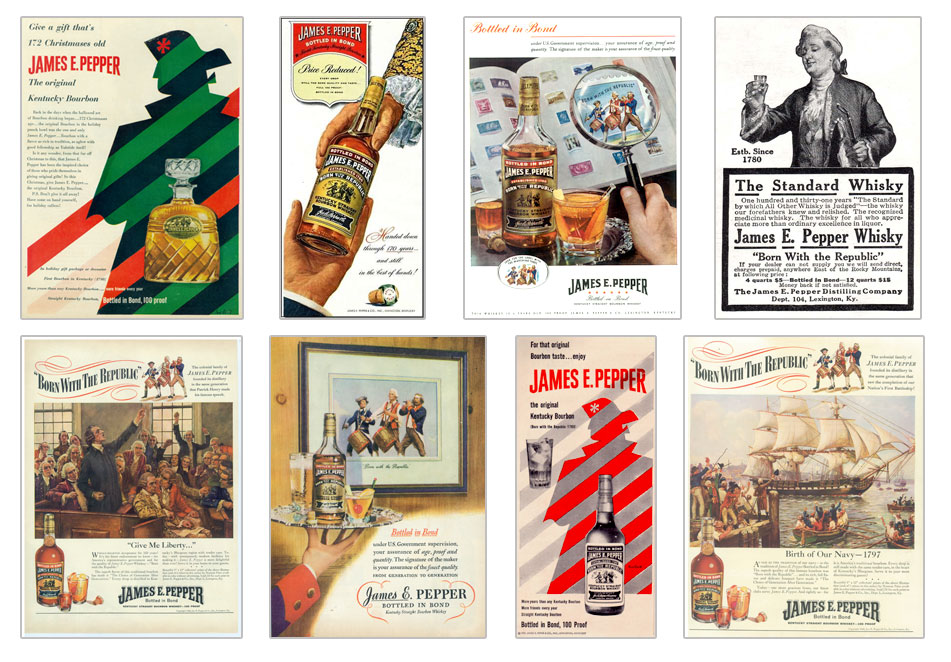 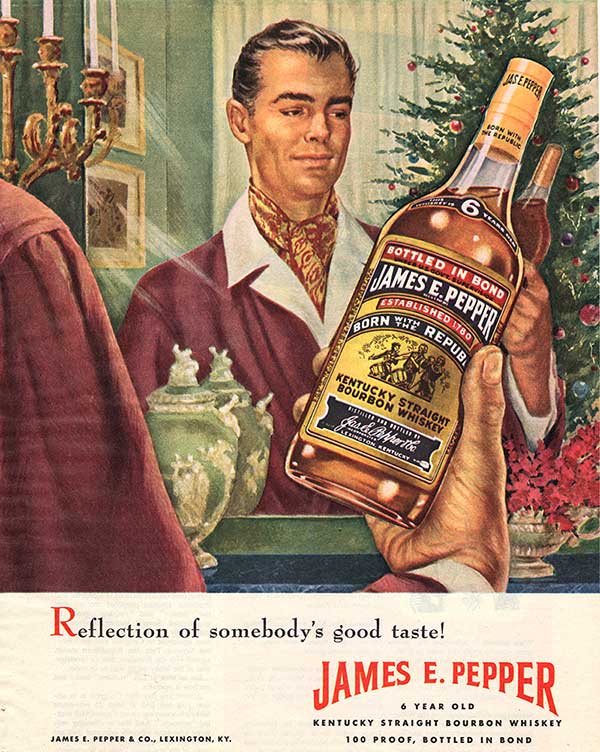 The bourbon industry falls on hard times, & the James E. Pepper distillery in Lexington, ceases production. The aged stocks are sold off into the 1970s and the distillery is abandoned… 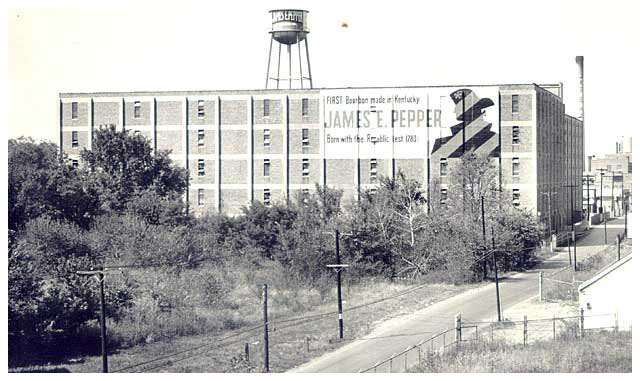 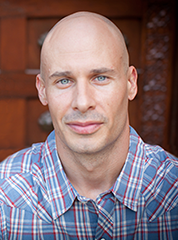 He acquires the rights to the brand and immediately embarks upon a campaign of thorough historical research and collection of historic materials (some of which you have recently viewed). A vast amount of information and historic materials are assembled (and continue to be assembled), so that the brand can be re‐launched in a proper fashion.

Amir’s personal affinity to the Pepper brand is strengthened by his own family connection to both the whiskey business during the American Revolution and his family roots in Kentucky. On one side of his family, Amir’s fifth great‐grandfather (Captain John Cassin) fought in the American Revolution alongside George Washington, then co‐founded the Navy Yard in DC where he was involved in trading barrels of whiskey in Georgetown (at the price of 52 cents per gallon for “good whisky”). The other side of his family traces back to the Peay family cemetery in Butler County, KY, and possible links to a Peay buried in the cemetery of Lexington, KY at the same time as James E. Pepper’s era.

One of the multiple letters we acquired from James E. Pepper himself, dated 1894. 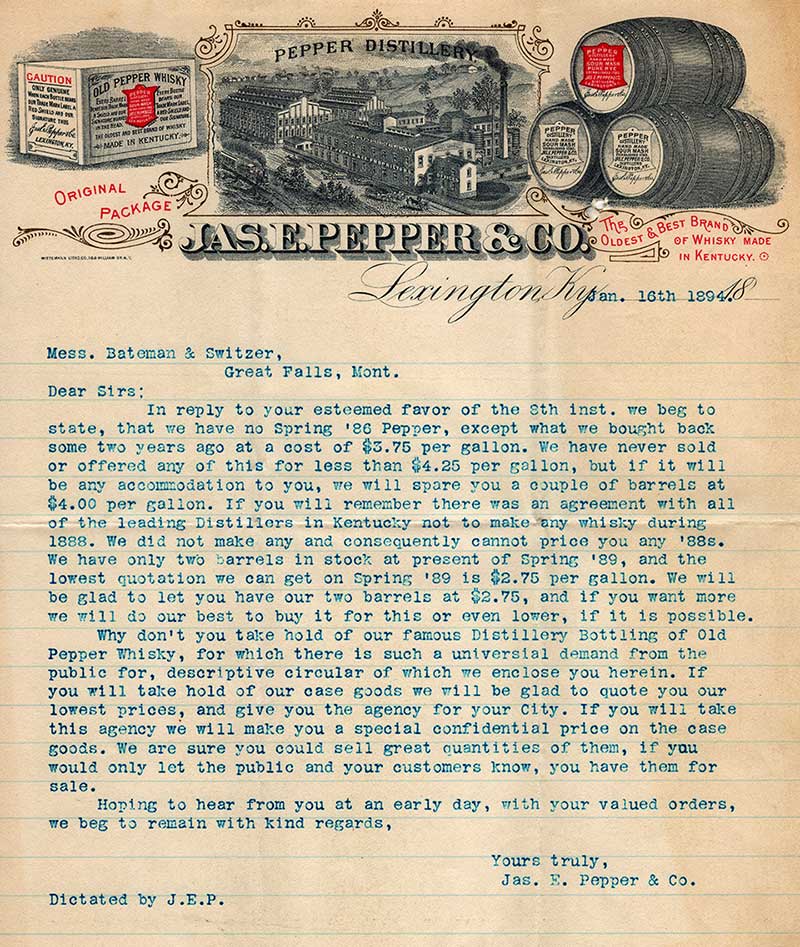 Referencing the historic materials, which included detailed old recipes, grain bills and production methods, partnerships were formed with existing distilleries to produce whiskey for the brand and to retell the lost story of this iconic American whiskey brand. James E. Pepper whiskey is re‐introduced to the world.

At the same time the brand is being reintroduced to the world, a desire to rebuild a distillery and museum in the abandoned historic James E. Pepper Distillery in Lexington is pursued. The final remnants of the distillery, built in 1936 by the Schenley Company, sat on a vast property that contained multiple buildings and structures. The two main structures that remained were a 100,000 barrel rick house and the large main distillery building, both constructed of solid concrete, masonry, and steel beam structures. Abandoned for 60 years these buildings and the property fell into a very bad state of repair, but remained structurally sound. While there were plans to redevelop the area, for some time the property was not tenable for a distillery project. However an open interest was expressed to property owners should the ability ever arise to rebuild a distillery. 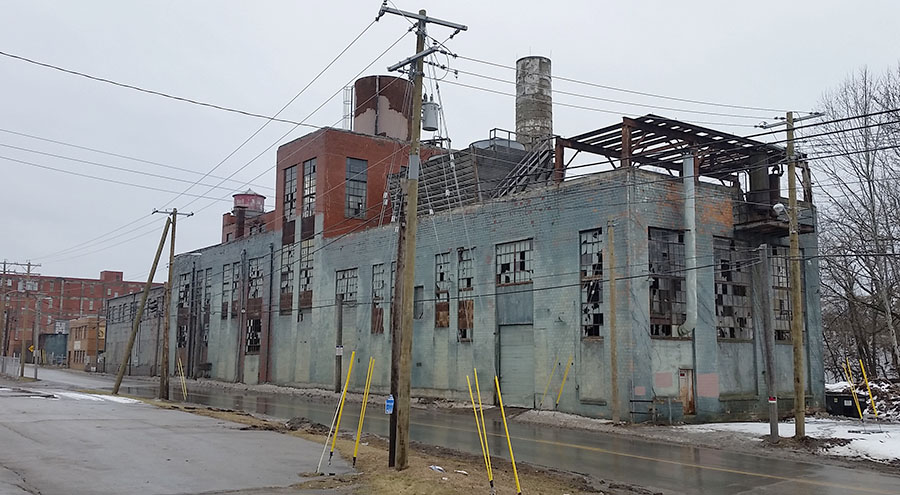 Portions of the distillery property were sold to local Lexington entrepreneurs, and the power of small business and the people of Lexington began to make something magical happen at the old distillery in the form of an entertainment district with a restaurant, brewery, bar, and more…

The historic heritage of Lexington, Kentucky, makes room for innovative passion in the form of beer, art and community based businesses… On the campus of the old James E. Pepper distillery in Lexington’s Distillery District –  American Airlines in‐flight Magazine

With all of the momentum at the site the door was open to try and bring the brand back to its rightful home and to take its place as the anchor tenant in the main distillery building, which remained unrenovated. The prospect was even more thrilling considering all of the historic distillery materials that had been assembled over the years, which included…

…detailed historic site plans for the distillery from 1894…

…detailed mechanical drawings from the old distillery, from 1934 (the year Prohibition was repealed in Kentucky)… 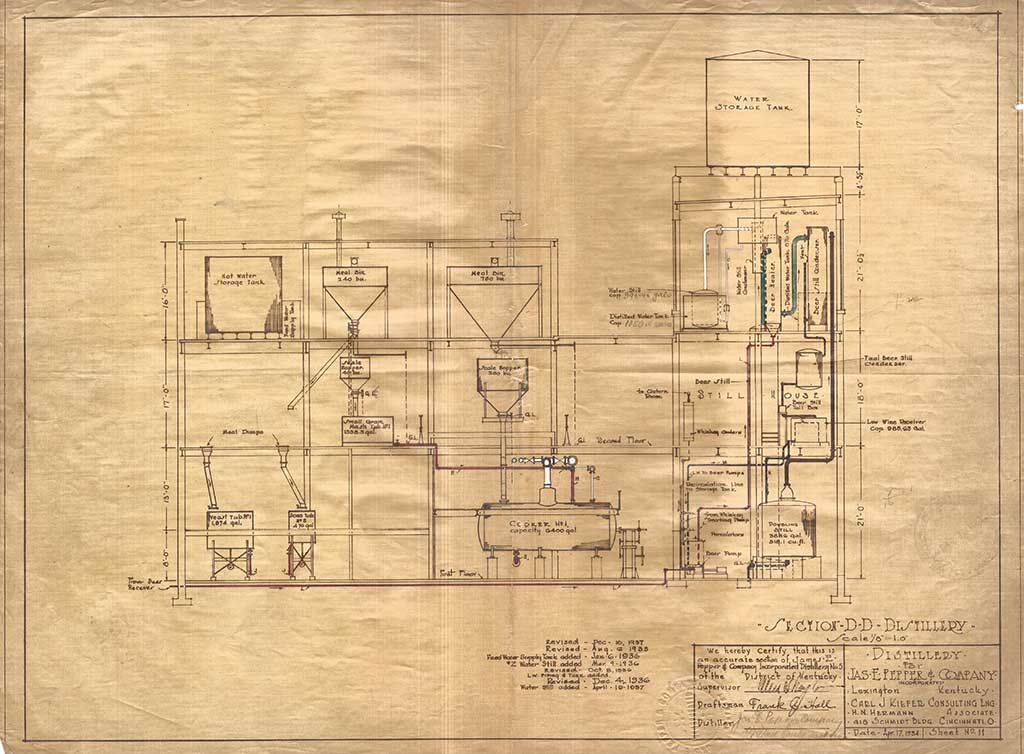 …and even the old copper plate from Vendome stills, from 1934 (the year Prohibition was repealed in Kentucky and from the same still designed in the mechanical drawings above). 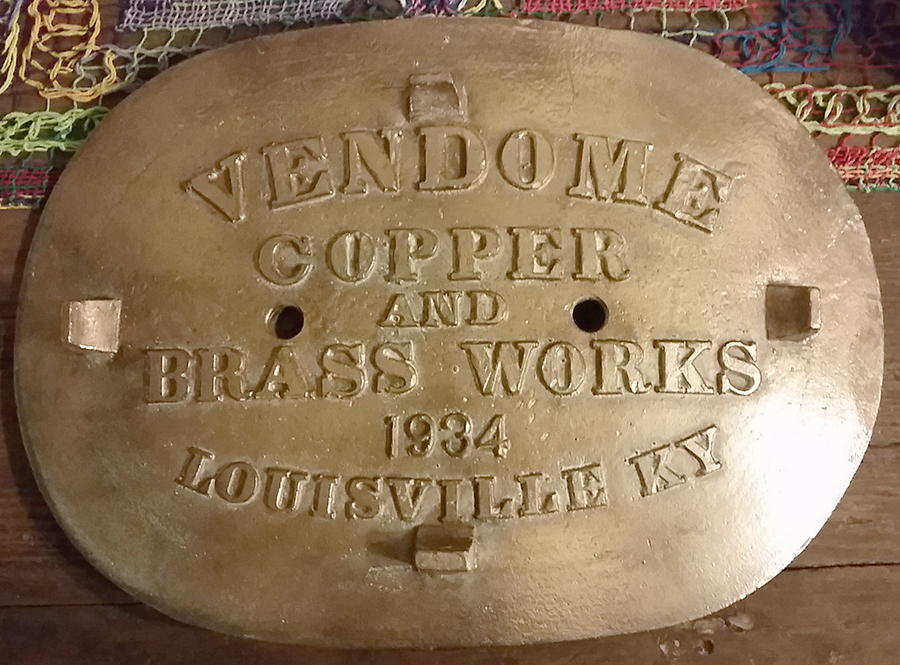 Then on May 4, 2016, after years of work and with great pleasure, it was happily announced that James E. Pepper would be rebuilding a craft distillery and museum in the remains of the historic James E. Pepper distillery. The re-built distillery filled its first barrel on December 21st, 2017. You can learn more about the distillery on our Distillery page.